A place to grow

A place to belong!

It was an awesome time on the slopes!

Get connected with the Revolution!

Check out this video! 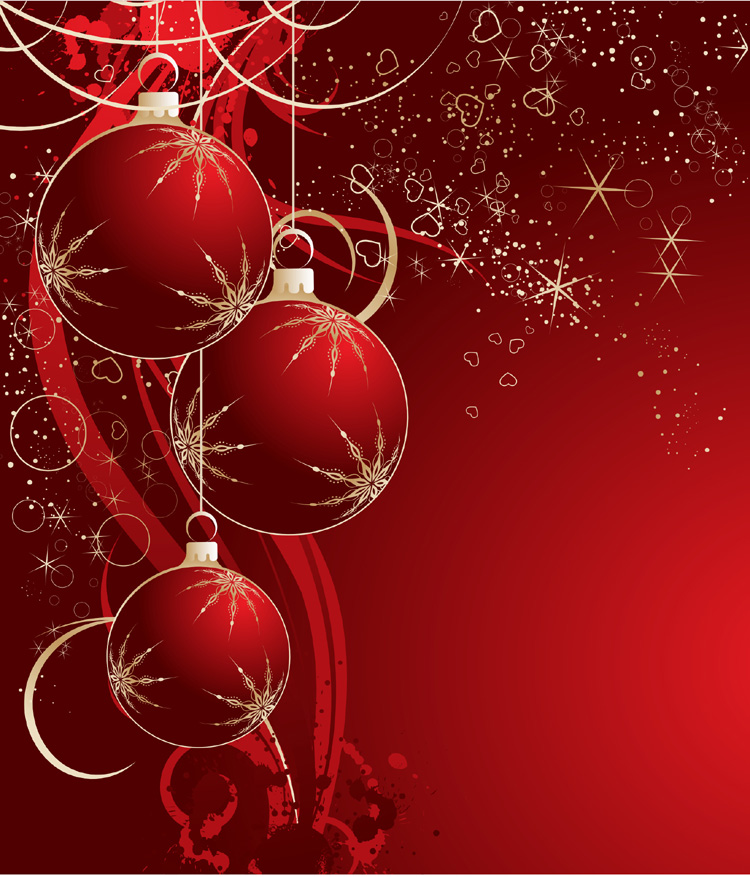 The Annual RIVER Christmas Party! Here are the details:

Don’t be late!  Come a little early!  We will be leaving for skating at the beginning and it will be a lot of fun, so don’t miss it! 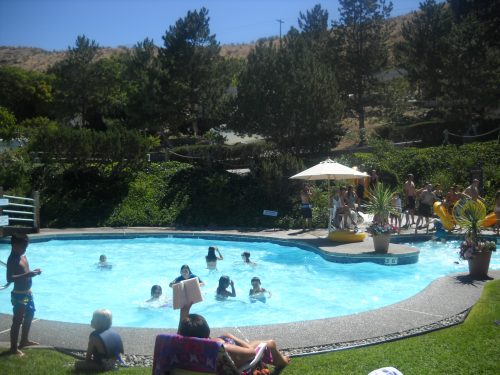 It’s an end-of-summer trip, just before a new school year – an opportunity for fellowship and fun, but also devotions, prayer and refocusing.

We plan to leave Wednesday morning to a lodge in Plain for worship, devotions, prayer, activities, meals and rest that night. The next morning, we will go over to a water park in Chelan for the day, heading back home after supper, arriving in the evening.

Here are some notes for the upcoming weeks…

We have lots of special nights planned throughout the summertime.

It will be at Church at the normal time of 6:30pm.

Same as last summer, sports are going to be organized on the front lawn before River from 6:00-6:30pm. (although rain is forecasted tomorrow)

We’re going to head out to Kayak Point NEXT Wednesday (July 10th) for our youth meeting!  We’re going to leave earlier than usual…..at 6:00pm. So aim to be here a few minutes before 6pm.  With the travel time we will finish an hour later than usual so we won’t make it back til 9pm.  This is always a favorite as it’s such a beautiful setting and great time.  Pass the news on to others who might not know. You might also want to bring a jacket as being by the water sometimes makes things are a little cooler.

Be praying for this special mission and training time!

We will have River on our (Luke and Summer’s) deck Wednesday, July 24th. It will be a relaxed time with volleyball, songs, stories, testimonies and such. Meet at church at 6:10pm to be shuttled to our house in vans due to limited parking at our place. 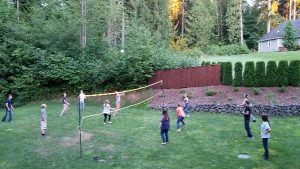 If youth are being dropped off, they are welcome to be dropped off directly at our house 6:20pm. Our address is 17013 71st Dr NE, Arlington. It is about 1 minute from church.

The 7th Grade Welcome and Annual Barbecue is coming up in the month of August! Stay tuned for the date.

This is always a fun event of games, food, traditions and a special welcome of all the new 7th graders into River!!

Hamburgers will be on the grill and lots of good stuff! 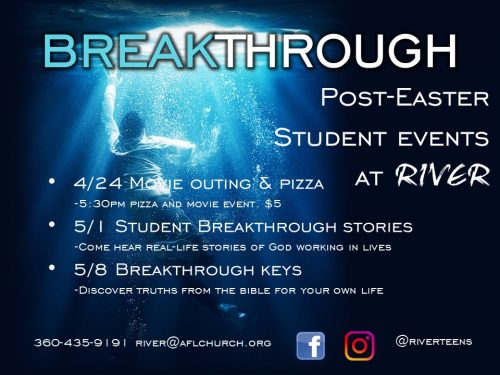 Join us for our next Breakthrough event this Wednesday! You don’t have to have seen the movie to come hear truths related to breakthroughs. Bring a friend along for this awesome time of digging into how God works in our lives and helps us to see what he has in store for us! 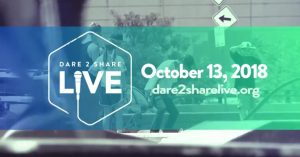 5 Reasons to invite your friends to Dare2Share Live.

Hey, my name is Conor! I was a student who attended Dare2Share Live last year and I wanted to write a little bit about my experience.

First off, you may be asking, “What even is Dare2Share Live?” Dare2Share Live is a one day prayer, equipping and outreach event that connects thousands of different churches across the nation all at the same time. It is an action-packed 7 hours that energizes, trains and unleashes teens to share Christ with the world. Here are 5 reasons to attend!

Reason 1: It’s In Your Region!

Sometimes going to a conference can be intimidating because you have to travel forever to get there and when you do, it is full of people you don’t know. One of the cool things about Dare2Share Live is that while it is an event involving many different churches, it is also accessible as there are nearly 100 satellite locations all over the nation! This gives you the opportunity to connect with the students in your region and also make more of an impact on your local area.

Reason 2: Nation Wide Event That Is Part Of A Movement!

One of the reasons Dare2Share live is awesome is because it’s not only is an event that you can attend locally, but it is also a movement that is catching fire within youth groups across the nation. This means that while you are doing things in your area, people on the other side of the continent are active in the same things at exactly the same time! I remember last year that I had a real sense of unity with the church as a whole as I saw the outreach map light up all over the country on the Dare2Share App.

Sometimes people can be wary of going to a conference because they aren’t sure it will be engaging enough, or they are afraid it will be too outdated. You don’t have to worry about this at Dare2Share Live! It is a three-screen event involving a screen broadcast from Denver, a local screen (with onsite worship team and Emcee) and the screen of the app built just for the event! To me, the app was one of the coolest aspects of Dare2Share Live as it was so intentionally designed with awesome tools to see and engage in the Cause of Christ.

Reason 5: It’s not just about you.

My final reason to go to Dare2Share Live is that it’s not just about you. I’ve always enjoyed going to camps and conferences but it seems like the focus is mainly about my experience. In a culture that is so focused on self, it is really refreshing to see an event that equips me to reach out to others! When I left the event last year, I could see that God had used my life that very day to touch others and I was left with a greater passion for the Cause of Christ.

I’m very excited to see what God has in store for this next Dare2Share Live and I hope to see you there!